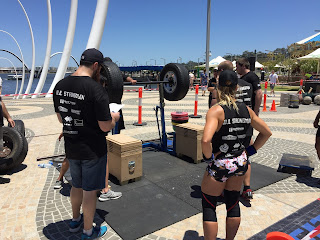 YOU KNEW for sure it was summer when you felt the heat beating off the slick concrete of Elizabeth Quay. The temperature created the perfect environment to further test this year's finalists for the WA Strongman state championships. This was the second time the Quay played host to a WA Strongman event, and the organisers and crowd came prepared. A small village of gazebos and tented merchandise tables looked out over the spectacle, and could be seen from Riverside drive. 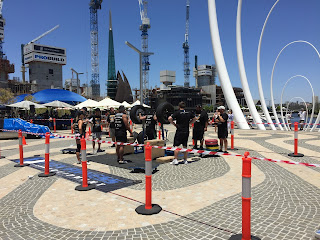 PTC Strongman was today represented by Jacqui in the under 82.5 kilograms womens division, and Steve and Kieran in the mens under 90s. Kieran and Jacqueline have only been training strongman events for a few months, so it was impressive that they both made it to finals on their first foray into the sport. Jacqui took third place in her class and ticked off a load of new personal records in the process. Her comp prep was not as good as it might have been, and she was a little fatigued from taking on too much in the few weeks leading up to it. But on the day she felt strong and ready, and it showed. I know she's very happy with her performance, and she's assured me she will take a week's rest... right after next weekend's push/pull comp. 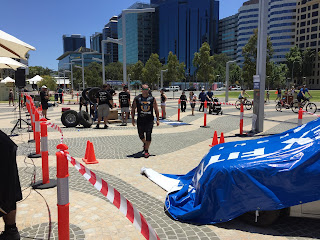 Kieran gave it his all and also made a bunch of new personal records, but with a fully decked division had a tough time keeping in the top tiers. He ended the day in fifth place. Completely undaunted by this, the smiling and bushy-bearded Kieran has a big, fat, under 105 dream for 2018. PTC Strongman is gonna get him there. Us and his missus, who will need to feed him constantly.

Steve, being the only one of the three with a significant amount of strongman-specific training under his belt (and an already impressive under 80s Crossfit athlete), nonetheless found some very tough competition in his class. The mens under 90s was stacked with talent. 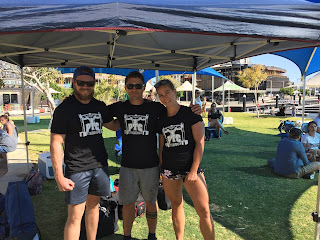 He ultimately had to be happy with second after a stellar performance from another multi-disciplined athlete, Ngarimu Ahipene. Ngarimu's team made it to the USA to compete in the world cup of Crossfit, the Crossfit Games, earlier this year. His pedigree and passion brought him a cut above our own Wonderboy. But, based on Steve's performance - all while weighing ten kilograms below his class - his gambit for an invite to the Arnolds 2018 is almost certain. 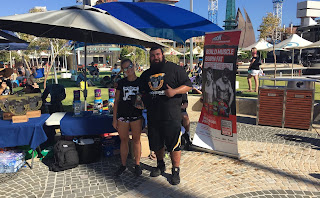 Of course, no state championship is quite complete without an upset, and today it came in the thin, sinewy Heavyweight division. Just two competitors filled the field: the internationally tested ASA and Static Monsters champion Matt Lynch Blanch capping off a brilliant year, and the wiry young freak of nature, Max McCall.

The tussle was close, and both athletes displayed obvious strengths and weaknesses across the five novel events. But Matt finally found an end to his winning streak. The final trial, a mixed loading event, ended in a massive 180 kilogram stone that proved too much for the mighty Matt, while Max's lightning quick car walk and impressive stonework clinched the win for him. 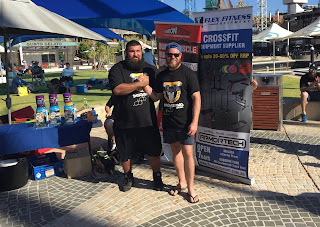 Thanks to all our athletes and support crew for coming out today. At next year's state finals, the field and the audience will be stacked with PTCStrongfolk. 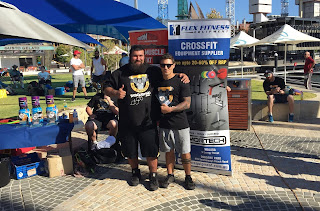