I HAVE been waiting years for this day.

It was Hillarys Boat Harbour that played host to WA Strongman's first qualifier for 2018. While the clouds couldn't decide if they were staying or going, they stopped threatening rain before the action began, leaving us with beautiful, temperate weather. And there were loads of action and awe-inspiring spectacles of strength for the ample crowd to enjoy throughout the day. Indeed the weather, the venue, the spectators and the level of competition were all superb.

First up were the women's divisions, and immediately PTCSM's newest member, Trish, showed her quality. Trish has only been training strongman a few weeks (a few weeks!) and chose to enter as a novice, but her efforts were easily worthy of qualifying for the state finals. She was lightning fast with her yoke and farmers walks, pulled a whopping nineteen reps in the deadlift (and could have done another ten judging by how comfortable it seemed) and made the carry medley look just as pedestrian. I know for a fact she will go on to dominate in this sport if she chooses to. Her performance today was the tip of the spear that was the PTC Strongman offensive. 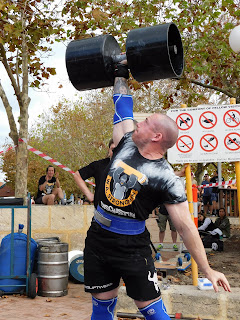 Jacqui - who has just returned from competing at the Arnolds!  - nonetheless dived into the under 65 kilo women's qualifiers and showed us all how she's already been there and done that. The whole comp just looked like a fun day out for her. She blitzed the field and took first place too.

The under 90 and under 105 kilogram divisions were well and truly stacked for this comp, which is a recurring theme of recent years. I saw some very strong, very ripped men move impressive amounts of weight. But it was our Wonderboy, Steve van Steytler (also just back from the Arnolds), who took first in the under 90s while still punching a good 10 kilos above his actual weight. While that win was just another feather in Steve's cap, it was thrilling for the rest of us to watch him in action.

I have a huge amount of admiration for any athlete who chooses to get straight back into it just weeks after competing at a national level. I know for a fact how grueling that is, or at least it was when I did it. Yet Steve and Jacqui had smiles on their faces the whole time. This honestly was just a bit of fun for them both.

Kieran has made the big step up to the under 105s to compete alongside Kyle and my second oldest trainee at PTC, Alex. His real name is Aleksei and he doesn't use social media, so it's been kinda hard for me to promote him. He works unbelievably hard and, pound for pound, is maybe the strongest person I can say I coached to that level (though I do have to share credit there with the Lion).

Here he is walking a 370 kilo yoke twenty meters. In the comp he only needed to move 275.

This was Alex's second ever strongman comp, his first being the ASA national qualifier PTC Perth hosted last year, and he took third place in what was an excellent tussle for the podium. Kyle and Kieran both gave it their all but finished up with fifth and seventh place respectively. I know they are both disappointed and I also know they aren't quitters, so they will be back.

Then came the heavyweights, and there were just two. The teacher and the student, as Kong put it and Dan later announced to the crowd. It has been two and a half years since I last competed in a full strongman comp (Static Monsters doesn't count and was a walk in the park compared with today); late August 2015. I won, but it was a grueling battle against veteran WA Strongman Jay Connolly which came down to a sudden death match loading a 120 kilogram keg to a platform; max repetitions in one minute.

Well history repeated itself today. There were three seconds difference between our yoke walk times and three fractions of a second between our farmers - both in Kong's favour. I beat him comfortably in the deadlift, as expected. Also pretty much as expected, neither of us could manage the 65 kilo monster dumbbell. But neither of us could finish the carry medley either. The third and final implement - a 130 kilo sandbag - I could only carry a few meters before my conditioning allowed no more. Kong couldn't really pick it successfully, so didn't carry it far at all. It came down to a sixth event; a sudden death match loading a 120 kilogram keg over a 1.2 meter high bar. Max repetitions in one minute.

As a competitor I have made something of a career coming second to better athletes. From my first coach Dan Macri and the Awesome As ogre, Les Milhinich, to Joel McLeod and his protégé Liam McIntyre, to 'the Warrior' Rongo Keene. But this is the first time I've been runner-up to someone I coached myself. After two years of him giving his all to this sport, today Kong Kania won his first ever competition. I could not be prouder to come second to him... though at the time I was equal parts elated and sick to my stomach. Like, literally forcing myself not to vomit. That sudden death match felt like it almost killed me.

I have been coaching people for going on five years now. From my first class at Genesis Bentley in early 2014 to today, I have tried my best to impart what I have (and continue to) learn, along with a few principles that your momma woulda taught you. Something I take seriously is comradeship. Strongman is an individual - not a team - sport, this is a fact, and if I'm being honest it's is one of the things I like most about it. Pursuing it has always been a journey of self-improvement for me, and I've never been okay with my success or my failure being a shared responsibility. But this fact does not entitle any athlete, or anyone I coach, to get an ego about themselves. We train as a team, we get stronger as a team, and one day soon we will travel interstate to compete as a team. When someone gets injured or is having a shit time of it, we work through it as a team. And it was exactly that kind of comradeship that I witnessed today.

The Lion, the Yak, the Behemoth and Mat showed up to watch the day's events, along with a slew of PTC Perth folk, which I was also very pleased to see. At the end of the day it was announced that this was the largest number of athletes to ever enter a WA Strongman competition. I think the total was 27 entrants. Despite this - and even with the extra time needed for the sudden death match - the whole thing was wrapped up well before 5PM, including awards and pictures. A big hand has to go to Jack Opferkutch of WASM and his crew of loaders, timers and referees. Strict warmup times were enforced, there were no misloads, and even with an apparatus malfunction during the final event (one of the sandbags busted), a solution was implemented in short order.