THE GREY morning sky threatened rain. The first ever Static Monsters Perth was situated a few meters away from the entrance to Coventry Square, Morley. Just under cover, in the event that things got wet. But rain remained an empty threat and the sun came out not long after we got underway. 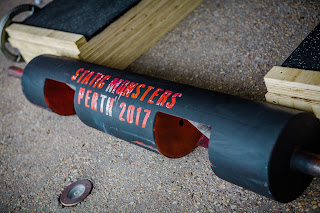 There were seven athletes in all, and the events ran like clockwork for precisely two hours. Among the most impressive feats of the day were a 140 kilo log press by Matt Lynch Blanch and an attempt at an under 105 national record 372.5 deadlift (which looked like it almost killed him), a mammoth 380 kilogram pull from the mountain Matt van Beuningen, and an insane 310 pull from our own Wonderboy Steve van Steytler! At under 80 kilos body weight!!

Considering the various challenges and setbacks that were faced in getting this competition off the ground, I am absolutely thrilled with how well it all went. There's no way in hell I could have done it without the help of others, and thanking them is the bulk of what follows as I have so many people to give thanks to!

I will start with the athletes. Matt Lynch Blanch, Matt van Beuningen, Kristy Barr, Kezia Duncan, Steve van Steytler, and John Champion. Thank you all for coming out and bringing your A game for this event. I know every one of you gave it your all, producing some truly dramatic scenes and incredible lifts to mark this historic occasion in the WA strength sports calendar. 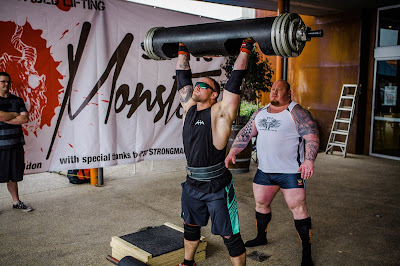 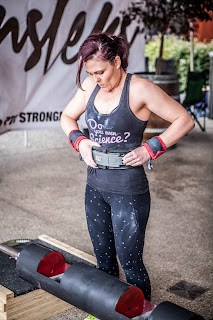 Of course, ordinary folk don't really get how much time and effort strong folk put into their sport. The hours spent in the gym, at the physio, and researching their passion adds up. Add to that several hours' drive just to compete and you're in the same predicament as Matt van Beuningen, Matt Lynch Blanch, Kristy Barr and Kezia Duncan. These competitors hail from Bunbury, Port Kennedy and Kalgoorlie respectively. Without these men and women there simply would be no competition. Thanks to you all.

Mick Everitt is easily today's MVP. Mick stepped up (pardon the pun) when the Yak could not. He loaded his truck with about half a tonne of plates and apparatus from PTC on Friday and met me on location at 8am to help setup. He assisted with unloading the near tonne of assorted gear gathered for the occasion, erected Kyle's gazebos, and helped hang the banner all in good time.

But he wasn't even close to done. Mick is a pro-photographer, and spent the next two plus hours taking footage of the event! I've included a collection of some of my favourites here, but the whole Facebook album can be viewed by clicking this link. 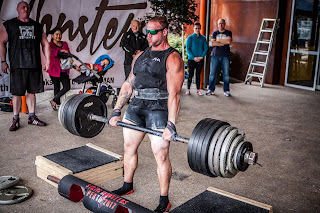 We met with Laura of Coventry management who happily provided a ladder* to hang the enormous Static Monsters banner, made by Brad Humble of Dungeon Powerlifting. The banner turned out frigging amazing, I have to say. And if your eyes work, you'd have to agree.

Kezia Duncan arrived well ahead of schedule and was first to sign-off and weigh-in. While my attention was divided by the various tasks that needed completing before kick-off, she bought me breakfast. I didn't plan breakfast. 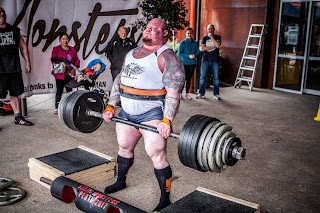 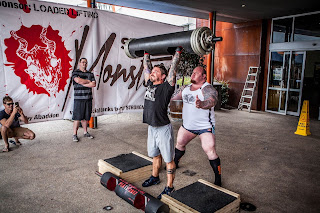 John Champion is the first under 90s athlete that I coached. He took first place in both the under 90s and under 105s at the WA Strongman state championships in 2015, and this was his second strongman competition run by myself. John was next on the scene and first up the ladder to secure the banner, which was a tremendous relief to Mick and myself, who each weigh in excess of the max load bearing capacity of a great many things, chairs and ladders included. With his help the setup was done in good time.

Gabor Szivek is an old mate who has helped me with all the comps I've run. He helped with the banner, he kept score, and did the math when my brain failed me, more than a couple of times. When all was done, before he left he said "See you for the next comp." That's a fucking asset, and a true friend.


Steve van Steytler is a star on and off the platform. Steve brought 160-plus kilograms of bumper plates for use in the deadlift (and every kilo was needed!), also helped get the banner up and assisted with loading when not lifting himself.


Kyle and Kong couldn't make it, but it was Kyle's gazebos that provided shade and a place to warm up for the athletes, and Kong's cast iron 25s added another hundred much-needed kilos to the weight tally. Thanks to you both, and I know you would have made it if you could. 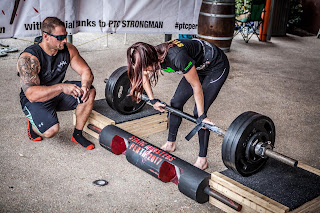 Also thanks to Jarek Walus for the gritty, behind-the-scenes style vids of today's axle deadlifts. Mate, I'm sorry the sponsorship deal with your former employer fell through, but your help and support is always appreciated and I know you'll be one of the first to put your hand up next time. Thank you.

A shout-out to Nathan the Yak, who'd planned to show up early at my place to help move gear. Unfortunately for him, his unsafe workplace had other plans. Nathan broke his knee when he fell into a recently-dug, un-demarcated, knee-deep hole while on late shift two nights prior. You were missed today, Yak. I hope you are up and walking again soon. 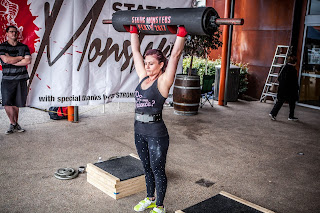 The man, James Alan of Loaded Lifting, for sponsoring Static Monsters Perth and providing awesome prize packs for the biggest lifts of the day.

PTC Perth and the Rucci brothers, for so many things, but today it was their logs, axles and spin-locks that made sure the lifts were both heavy and safe. We were able to fit over 400 kilograms of regular plates on that axle, and the 12 inch Stand & Submit log is spectacular to watch in action, especially when loaded to 140 and more kilos! PTC Perth provide some of the very best training and competition equipment for me and the PTC Strongman crew to get stronger. 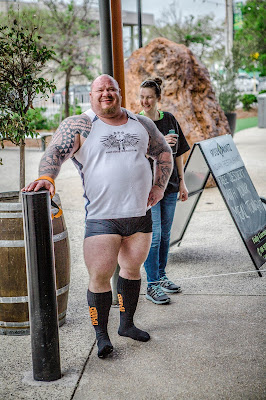 Les Milhinich of Awesome As for personally constructing the platforms for the event. These were made to my own, very basic design but with added handles, so regular folk can (try to) lift them. They are heavy and will last an age, which is perfect.

Also thanks to WA Strongman's own Jack 'the baby-faced assassin' Opferkutch, for helping to load and officiate the deadlifting.

Last but not least: Chad Croft and the Australian Strongman Alliance, for reaching out to me last year with the proposition of representing the ASA, and providing more opportunities for West Australian strength athletes to progress in the sport. Thank you for the opportunity.