A Weekend with Brandon Lilly 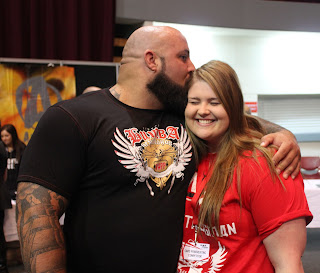 FOR ME to be the first to arrive is a rare thing indeed. I’m usually just on time, or late, or (if it’s around Hillarys) lost. So here I was, sitting alone at a banquet table in Lapa, a Brazilian barbeque restaurant at the heart of Armadale’s shopping district… and a pretty difficult place to find on a rainy night, as it turns out. But then if you're not a local, that's pretty understandable (and if you are, you're probably loling about the fact that we were in Armadale).

Brandon Lilly, his wife, and the rest of WA Strongman eventually got there and dinner was underway an hour after the reservation, but we made up for the late start by eating everything in sight and beckoning the wait staff to come by again and again with skewers of different, delicious meats.

Once everyone had eaten enough to be slowed down with meat sweats, and after a bit of small talk, Dan asked Brandon how he’d come to create the Cube training method. This kicked off the most fascinating discussion of strength I’ve ever been privy to. I was at the opposite end of the table to Brandon, so I couldn’t catch everything he said. But what I did hear was quite astounding.

For a start, Brandon told us he left West Side Barbell to get stronger. But when he started lifting in high school he couldn’t bench 60 kilos. He tried to squat 60 and fell on his face, busting his nose. In fact he was, in general, incredibly weak (compare this, he said, to his friend Dave Hoff who was benching 160 for reps at age fifteen). This was a massive revelation for myself, to see proof first hand that genetics isn’t the only determinant of strength.

Though it is, quite plainly, a major factor. Just look at arguably the strongest deadlifter in the world right now; Benedikt Magnusson. Brandon told us that Benedikt really wanted to work with cosmetics, and would rather go clay pigeon shooting, or do a variety of activities other than train. He is exceptionally intelligent but doesn’t like to advertise the fact. He is one of several brothers, the smallest of whom can deadlift 400 kilos. Magnusson told Brandon this last fact as a way of explaining to him why he, at that stage of his career, should have been lifting more than he was (if Benny’s little brother could do it, so could Brandon, obviously).
Brandon gave us all some great suggestions on how to begin tailoring the Cube method to our Strongman training (similar to Josh Thigpen’s treatment), and by the time we had all eaten our fill and it was time to leave it felt like Dan and Brandon had really only just gotten started. 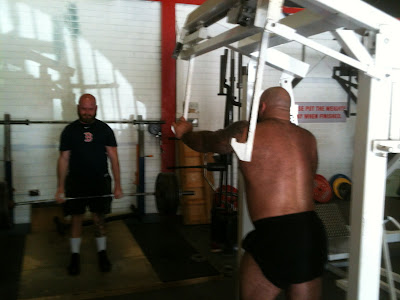 The Muscle Pit again played host to the strongest in the iron game. SMWA did our training outside
while a small but lively crowd gathered indoors, where a semi-naked Lilly was giving one-on-one coaching in the deadlift. The atmosphere was incredible; one newcomer, Kurt, was so inspired seeing people around him charged up and hitting records that he hit one himself; a 115 kilo snatch (at about 70 kilos bodyweight I believe) and Gabor walked a 400 kilo yoke the full 15 meters.

When I left, Dan and Brandon were locked in conversation once more while his trainees continued to smash weight on the platform.

Brandon Lilly went to a school with no dividing walls between classes. To this day, background noise allows him to think more clearly. So facing a crowd of thirty or more people all seated in awed silence seemed to make him a little uncomfortable. He encouraged us to talk amongst ourselves while he jotted out some diagrams and program templates on the whiteboard behind him.

The design of the Cube was first on the agenda, though the seminar was not rigidly structured; Lilly relied on his audience to ask him what they wanted to know, and invariably this would lead to anecdotes and stories about the many strong, strong guys he’d met, learned from and competed against in his career. He would always answer the question, but there was sometimes such depth to his reply that the original question became incidental.

Brandon gave us a stark insight into his past and the trials he and his second wife have gone through in order for him to make his 1015 kilo RAW total. How he’d been dealt a bad hand academically and his high school coach, Travis Lynch, had introduced him to the iron when he could no longer play soccer for his school. You could say that it was under the bar where Brandon had his first great successes in life, something that I think a lot of us can identify with. 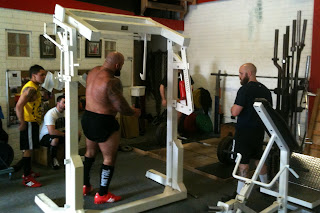 But when he chose to follow his dream and commit to Powerlifting 100%, he lost the support of his first wife and pretty much his entire family. Before he met his second wife, Jess (who was a little embarrassed, seated amongst the crowd), he was alone. “Eddie Coan lived with his parents, in their basement, while he followed his dream.” Brandon said, adding that while it was a great thing to have such supportive parents, he didn’t think he could have done it himself. Dependence on other people in that way would damage his pride.

He talked about sacrifice and priorities. Jess, for instance, travels hundreds of miles each week to her part time nursing job and back home again, just so she can be with him. He explained to us that it wasn’t even a question; he hadn’t asked her to do this, she did it because that was what she needed to do, just as he needed to be where he was. He pointed to his shirt, and said that he’d have arrived shirtless today if his wife hadn’t handed it to him; same with all his clothes, for that matter; he wears the shirts and shorts his sponsors give him to wear. He doesn’t waste money or time on clothes, and pays no attention to fashion.
“Think about this" he said, "what if all you had in life was the iron? What if you were paid to train? What if all you did was squat, bench and deadlift every week for four weeks and on the fifth week compete. Well, that’s how it is for Russian athletes. Could you do it?”

I asked him about where his drive came from, and he said other lifters helped to give it to him. He follows his competition closely. He then spoke of the injuries he’d sustained, and the training methods he’d abandoned over the course of his career (and why Powerlifting in general was fraught with bad information). He had so many stories to tell about other great athletes and coaches he’d met; how he badgered Sheiko as often as he could get near enough to him to ask questions, and how even Jim Wendler would agree that Wendler’s 531 will make you a really strong dude, but it isn’t the best program for a competitive Powerlifter.

Magnusson had helped him improve his deadlift by making him drop his soap in the shower. And his shampoo bottle, and his washcloth. And perform a deadlift to use each one. “Make every lift a four hundred kilo lift.” He said ‘Bennie’ had been watching him perform variations of bench press when opening doors, eating with utensils, et cetera. He performed his best lift every day, and so he needed to adopt the same behaviour with the deadlift. It worked.

Brandon was a little offended when the questions seemed to dry up an hour or so after we’d resumed from lunch.  “Well I have a question then.” He said, “Why the fuck don’t you have more questions?” Then someone got the ball rolling again, and we learned why Brandon strips down to short shorts whenever he’s lifting.

“There will always be haters. My haters say, when I bench wearing clothes, that I got a [bench] shirt under there, or when I deadlift that I got a suit on. So that’s why in my last comp I took my shirt off and I pulled my shorts up. People might say ‘hey you look like a fag’, but I don’t care. Nobody can say I’m not a raw lifter.”

I left just as Lilly was getting to the practical part of the seminar, but I got a whole lot out of the day, and the weekend generally has been a major experience for me. I'm glad Brandon took the time to come and speak to us (Perth being a helluva detour from the CAPO worlds in Tasmania) and I wish him and his wife a safe trip back home.
at 4:44:00 AM