The Dolphins Health Precinct in Redcliffe, Queensland played host to this year's weekend of games. A sprawling campus with huge indoor swimming facilities and plenty of wide open spaces for the bigger events. And considering one event involved two trucks chained together, space was exactly what we needed!

I met up with a couple of other WA competitors who were staying in the same hotel and we made our way there early, to get better acquainted with the apparatus and get the lay of the land, as it were. Most competitors had already beaten us to it - the football grounds were littered with men in black, running yokes and tossing kegs in the balmy morning air.

I had plenty of opportunity to meet all the competitors in the Opens weight class - and many in the other divisions - and came away from the games with a bunch of new comrades in iron. There were some truly, insanely strong guys and girls at this year's championships, including Marc Wells, Mike 'H-bomb' Vrljic and the one and only Warrick Brant - who is considered by many to be Australia's strongest man. Derek Boyer I dare say isn't one of them.

Dan Macri wasn't at this year's Am Nats, having already secured his placing in Australia's Strongest Man 2012 and also being responsible for organising and running the Strongman WA finals, to be held the following weekend (this saturday October 6th). So in his absence the heavyweight category had just me representing Western Australia. But the under 105 kgs division, under 90s, under 80s, and women's divisions all had west aussies in their ranks. They were all SMWA members or friends, who came into the sport fresh after participating in the 2nd round of National Qualifiers (held at Crossfit Armed, Port Kennedy).

The events and weights for my division were as follows:

DAY 1
1. Yoke Walk: 405 kgs yoke walk for distance (40+ meters was allowable, and I believe Warrick walked it for 50!).
2. Keg Toss: 5 empty beer kegs, all the same weight, thrown over footy goal posts.
3. Dual Truck Pull: Some wild numbers have been given as to the weight of the trucks being pulled. I have it on good authority that the dual truck pull performed by the heavyweights consisted of two trucks, each weighing 8 tonnes. I originally had been told it was a 32 tonne truck pull...
4. Log Clean-Press: Rising bar, starting at 120 kgs.
5. Farmers Walk: Also rising bar, starting with 130 kgs p/hand.

I just wish I had more pictures. I've had to purloin other people's from Facebook, and hopefully there will be more coming along shortly. 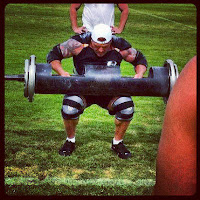 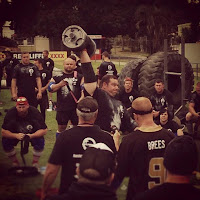 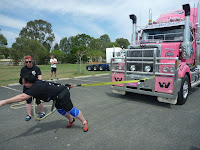 I will use this space to post my own results, though the truly amazing performances were from the big names in the Opens, and those same two guys who I train with and met up prior to the comp took first and second places in the under 80s and under 105s. I was very proud of both of them, and all the WA guys and girls.

1. Yoke Walk:
I moved it maybe 1 and a half meters, and my right shoulder got wrenched. Game over there. This was on grass, and it was awkward as hell. But considering I've not actually walked with more than 365 on my back before, this is nonetheless a new PR.

In hindsight this is a disappointment for me. I sat this event out, as I was worried about my injury. At the time I was weighing the pros and cons; It hurt to perform the motion, and I tried to toss a keg a couple of times. The second time I managed height but not arc, and I could feel it wearing at my tendon. Plus I hadn't trained for keg toss at all... so I concluded doing the event would jeopardise my chances later in the games. But those kegs were not heavy. I could have done it and come away with some more points at least.

3. Dual Truck Pull:
I was the front runner for at least the first few competitors, before some really heavy and powerful guys with the right knowledge and footwear to boot came and stole the show. But I was thankful to Scott Jones for providing some tutelage and reminding me what worked in training was going to work here too.  don't yet know the distance, but when I do I will advise. It was, however you slice it, one hell of a PR.

The one event I knew I definitely would not be able to do. Starting at 20 kilos over my personal best, this one I sat out too.

5. Farmers Walk:
This farmers walk was rising bar - something Iv'e never seen done in WSM, or heard of before in my short career. It was also based on completing the the 20 meter run with no drops, and time was not a factor. So I did the 130 p/hand at a comfortable pace and, after a brief rest, did the same again with 140 p/hand. Another PR. But there was no way I'd make a run with 150s after that. I saw too many people suffer palm tears in this event - more than were seen in SMWA's first round national qualifier Strength Quest, which had a large number of novices competing.

6. Conan Walk / Tyre Flip Medley:
This was a gruelling and very satisfying event for me. Again, I don't know the time and don't know when I will get a points and times breakdown, but I jogged with that 205 kgs yoke at a pace I've not managed in training, and the tyre was nearly 1.5 times as heavy as the heaviest I've flipped in training. I managed it just once, and my right thigh was stiff as a board for days after, from resting the tyre on it for what seemed like half an hour. Another couple of PRs.

7. Overhead Press Medley:
I had a strategy here. I just needed to press that 70 kg DB. But to do that proved too hard for me. I tried several times, cleaning it to position and wrenching my right arm in the process. I just didn't have the strength to push-press the thing - it wasn't stable, and I wasn't even able to move it a little. Not enough training in the DB push-press... and just not strong enough. But the most annoying thing is it exacerbated my injury even more, and afterwards I couldn't raise my arm above parallel without a deal of pain. Oh yeah. My strategy? If I made it past the DB I was gonna zercher clean the first axle into position and hope for the best. Heh. That shit probably was never gonna fly.

8. Deadlift:
My favourite event, and it sucked big time. Everything about this event I was not happy with. Deadlifting hundreds of kilos on an uneven grassy footy field was pretty poor. For our first National Qualifier 'Strength Quest' (which if you remember was held at the bottom of a sloping car park outside MuscleWorx Innaloo), Strongman Western Australia managed to provide not one but two platforms for the deadlift event. It was a less than ideal situation, certainly, but at least we had platforms we could position to make an even and hard, if not perfectly level surface. But this? This was well below my expectations. As the bar got heavier it sank further into the ground, and made training with heavy deficits an advantage. I've not performed a deficit before.

Add to this, we were using a standard Olympic barbell. Not a major issue, but I overthought things and opted to use straps, as I was concerned about grip strength with the thicker bar. I also double-overhanded the lift, and this cost me time while I struggled to lock out my 260 kilos opener. This was a PR, yeah, but well below what I wanted which is why I opened on it. On 270, I was too gassed to complete the lift... got it a few inches off the ground. Bombed. Pissed off. Didn't try for a third.

9. Atlas Stones:
Another event I couldn't do. The first stone was not a weight I would have had trouble with, ordinarily, but the first platform I had to load it on to was too high. It would have required my right arm to do things it could not at that point do. I sat by and watched some amazing feats from the other competitors, especially H-bomb and Warrick - who loaded all 5 in 18 seconds and 16 seconds respectively!!

That was last weekend. This weekend I plan to enter the WA finals and try to beat some of these PRs!