Events Saturday: What We Do Between Injuries... 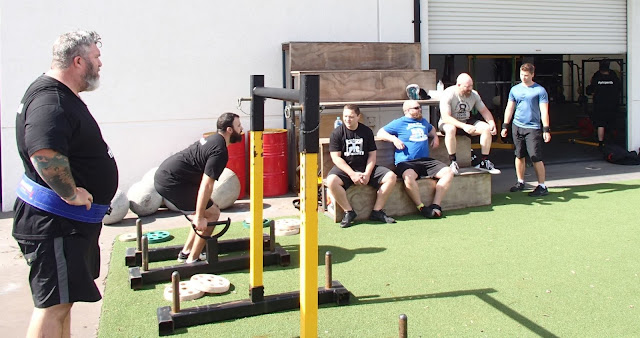 THIS was a pretty busy clinic considering more than half the crew are currently nursing injuries. The Lion, who also injured his bicep tendon (his in March of this year), has not been around much of late; this was his first clinic appearance in some months. He tells me he's also been crook lately, and I concluded that his rehab has not been going as well as we'd like.

Mick has just bounced back from his back issue a few weeks earlier and was keen to apply himself today. After some discussion with his primary coach and physio, Dan Rucci, I was pleased to watch Mick perform some straight bar deadlifts for the first time since joining the team. While I did have to cap his weight at well below 100 kilos, I think Mick was just happy pulling something other than the hexbar for a change.

Mathew hasn't been around much lately as his hips and posterior chain are all kinds of messed up. This is a condition he's had all his life, I expect. The training brings these issues to the fore and makes them near impossible not to address. It was great to see him moving some weight and doing it comfortably, with technical advice dished out by PTCSM's oldest member and resident physio, Ryan aka 'Hightower'. Ryan, notably, is not one of the injured many.

But Nathan is. It was his second clinic and the back complaint he mentioned last time was, predictably, still holding him back. Which means he needs to quit what he's doing and get that checked out. I don't allow people to train through injuries. I was even more concerned to learn that Nathan's legs are not the same length, and he should be wearing orthotics. I advised him that this sport will exacerbate otherwise minor impediments of this nature, and in addition to the info I gave him last week about getting regular physiotherapy, it was imperative that he sort this stuff out before continuing with his strongman events training. 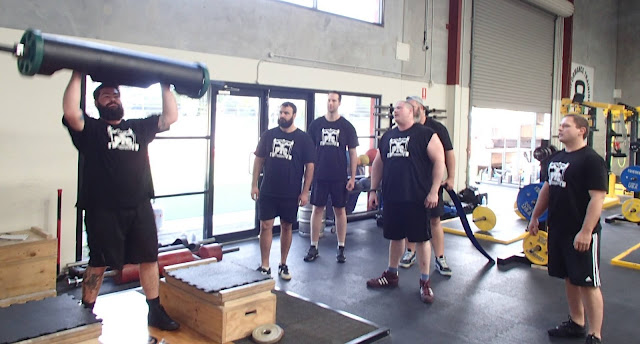 Alec's calf tear from just before the WASM August qualifier is almost one hundred per cent, he tells me, which is excellent news. He is currently in a deload phase with plans to ramp up again a little closer to the next competition, scheduled for some time in September.


My focus, of course, is still on the Perth Cup. And my next deadlift session... which may be at PTC Headquarters in Melbourne.
at 11:03:00 PM