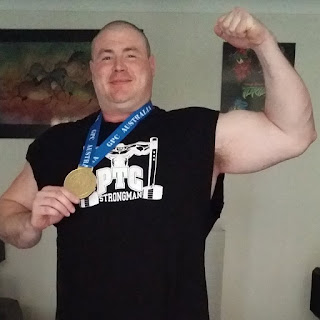 I HAD a good self-congratulatory session on Facebook Sunday, when the lifting was over. Now its time for the analysis. And as always, there's a lot of room for improvement. Here's how my lifts went:

I have a new challenge when I squat; the higher I wear my belt, the harder it is to hold my breath while in the hole. I now also have a tendency to go light-headed. This is what happened on my third attempt - a 255 kilo squat, and what would have been a new personal record. I didn't pass out, but I needed assistance racking the bar and walking away from the mono. My vision was a little blurry and I was shaky for a minute or so afterwards. I am strongly considering just squatting beltless in future.

Next came bench press, and I opened on an easy 150, with a plan to press 170 for my third. But I blew my second attempt by anticipating the 'press' call, and so retook 160. I was angry, and it flew up. I racked it for three white lights, but an easy 10 kilos was scrubbed from my potential total.

Deadlift is my pet event, as most people know. I was again the heaviest puller of the competition, with 320. But that was all I had left in me. I lowered my expectations on my third attempt, aiming for 330 to finish where I'd really hoped for 340 (or more). This was the second time I've tried to pull 330 in the last fortnight, and for the second time I failed. Its is an obvious indicator that I need to return to base-building.

While competitors travelled from all over - including a massive contingent from Dungeon Powerlifting, Bunbury - the day belonged to PTC, with a host of members testing their mettle and breaking gym records across the board. And we now have yet another lifter with an +800 kilogram total! Congratulations to Dale Smith for an excellent performance, made doubly impressive by the fact that he'd been rehabbing a patella injury in the months prior to the comp. He and Daniel Part (who just missed out on his own 800 total due to a grip issue on his last pull) have both scored invites to Pro Raw X.

For me, the spark to keep pushing was lit by none other than Dan Rucci, with his suggestion that I prep for the GPC Push/Pull in early December. While I had already intended to return my focus to Strongman - more specifically, preparing for the Static Monsters on October 28th - this fits in nicely with my other goals. And I'm not one to shy away from a challenge. I feel like I should do my best to salvage what I can from this year, competition-wise. I'm keeping my sights set on that 350 deadlift... and let's add a 200 kilo bench press to the bucket list for good measure. Only the former stands a realistic chance of happening before 2017 is through.
at 9:53:00 PM