Strongman Saturday: The Lion, the Mitch and the Sore Bros

TODAY was a good day. We could call this PTC Strongman's proper kick-off at the epic new facility. While most of the member base were representing PTC Perth at the health and fitness expo, my little clinic grew a little more. Today we welcomed back Carl, the Lion, who I've written fondly of in the past. Carl was orders of magnitude stronger than me when I met him five years back, and has a wealth of knowledge and experience. 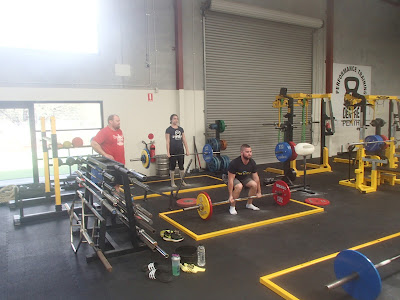 Also joining us today was newcomer Mitch. Mitch is a PTC freshman who competed in the most recent PL novice comp and has a current SBD of 170/110/200 at somewhere between 80 and 90 kilos bodweight. He's looking to cut to under 82, and will be using a calorie and carb deficit to do it, while working FIFO (yep, another one) and showing up to the clinics every three weeks, he says. I can work with that. We had a bit of a chat about his approach, and what I experienced when I did it myself a few years ago. I am looking forward to seeing his plans come to fruition, and introduced him to coach and athlete Brian Cook to offer some lifting and aesthetic inspiration. I told Mitch that one day he, too, could have a moustache like Brian's.

Stephan, king of the super-set, jumped in for some pulls here and there. Dale kept his distance, possibly still feeling the chip in his tooth from his first and last log press a few months ago. And Andrew was there when I arrived, having just had his arse handed to him by a 10 x 10 set/rep program Dan had given him for shits and giggles. He's working and studying full time right now, so comes in when he can. Hopefully we will see him for more clinics in the future.

In other news, dates for the last qualifying round and the WA Strongman state finals were announced this week. No events have been listed as yet, but the qualifier is on Saturday September 26th. Kong, who has the added challenge of working FIFO and so not here to train half the time, is nonetheless keen as mustard to get involved. And I'm going to get him as prepared as possible in the bare month he has before his first ever competition. 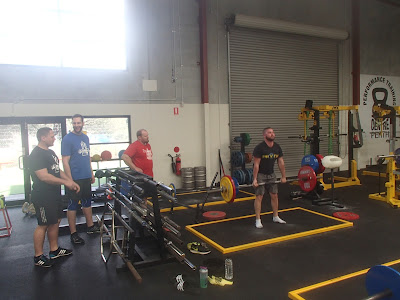 Ryan, sufficiently injury free, was the only member to show up last weekend. But today he was joined by Alex, fresh from his recent MRI to the right hip. He's torn the labrum but he's also experiencing numbness down the front of his quad. An ECG and more money burned is called for before he can get any closer to a proper diagnosis. I'm doing what I can to prevent him from making anything any worse in the mean time (and when numbness is a symptom, you literally don't know if what you're doing is exacerbating the issue), but that didn't stop him from a 250 yoke walk on the lush new turf.

I had a proud momma hen moment when I noticed Ryan and Alex leading by assistance and example; helping with straps, checking Mitch's form under the log and providing him with some textbook clean-presses to attempt to emulate. I won't lie; Mitch struggled with the movement initially. He couldn't get the pick and press to go fluidly. But with the guys plus Carl and me all throwing pointers at him he figured it out soon enough. He said his best overhead press was 60, but by the time his first ever log session was over Mitch had clean-pressed 45 and 50 for several reps each. He finished with a single of his one rep max, meaning that wasn't his proper one rep max. And now he's even stronger that that. 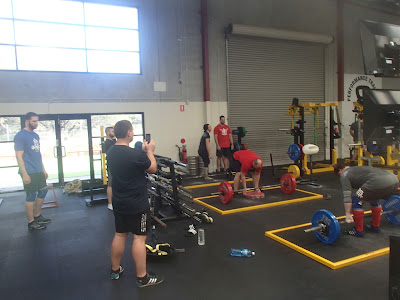 We also worked on his deadlift and introduced him to the yoke. He got the usual talk about getting out of bed tomorrow and how it was going to be hard to do. He reiterated how he'd only be showing up every few weeks and, from a recovery point of view, that suited him just fine.


Back to comp prep: while we don't know for sure what the events are, there are some you can pretty much count on being in the mix. So as from next weekend, and Kong's next session, we will be focussing on yoke and farmers walk, deadlift... and the wondrous log and axle press medley! 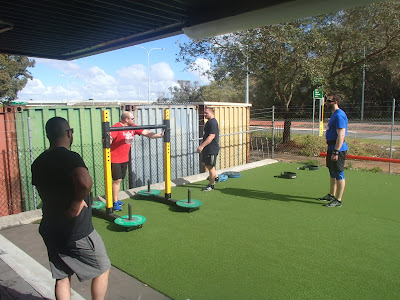 The medley only works when we have sufficient trainees to man the rising bar, like a pit crew. It's a sight to see when everyone's working in unison. And having newbie Mitch popping up in the future will give me the chance to introduce a new person to the sport, from scratch. It's both fun and rewarding to see that spark - that passion - in another new soul.


Back to comp prep next week for me. I'd be lying if I said everything felt great. But it's better than it was. I am either going to compete or burn out just beforehand. My last ditch effort to do a comp this year, before I face the reality of a long and pricey rehab to round out the year. But this year's been about bigger and better things than me and my next comp. This year has seen the arrival of the next level in WA strength sports.