RECORDS were smashed today. I forgot to bring my camera. I took a few lacklustre pics with my iPhone. Regardless of what I take pics with, I never feel like I get close to capturing the essence of the day, and these few are not exceptions. But I was caught up in the proceedings and not thinking about what I needed to satisfy the requirements of social media. This is possibly why I still don't have an Instagram account; recording the stuff I do (or witness others do) with pictures is incidental to and in some cases detracts from the actual doing or witnessing. Like those people who spend the concert with their phone or camcorder held aloft, so they can capture the moment and, in so doing, not truly experience it. Not one of those people. 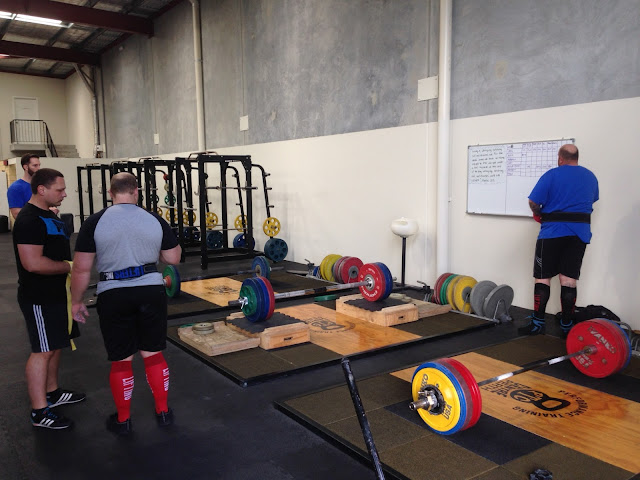 Ryan, the hightower who took on the WA Strongman under 105 division this year, hit a new personal best early in the proceedings - a 100 kilo axle clean-press - after making 95 (also a new PR) look like a warmup. Alex has yet to have his next specialist appointment, but says he's feeling well enough to tag along with Ryan and the rest of the crew, which today included Carl (king of the strict OHP) and PTC Perth's latest heavyweight strongman, Eddie 'Kong' Kania.

I tested Kong today. He has precious little time left to prepare for his first ever strongman competition, and while he has astutely picked the novice heavyweight division he still has a steep hill to climb when it comes to at least one event - the yoke walk. In most others he will be challenged, and five events over the course of however may hours the comp takes will definitely exhaust him. But he won't be destroyed by the experience. Attempting the actual heavyweight division at this stage would.

Kong performed four events in 90 minutes today: yoke walk, rising bar log clean press, rising bar axle deadlift, and farmers walk to finish. There was very little time wasted, and with Alex's help the session gave Kong a bit of a taste of what a real comp is like. Alex not only assisted with loading and strapping etc, he was training at 75% capacity where possible. The dude wants to lift more. Just like me, his body is currently not allowing him to lift like he wants to. Them feels. 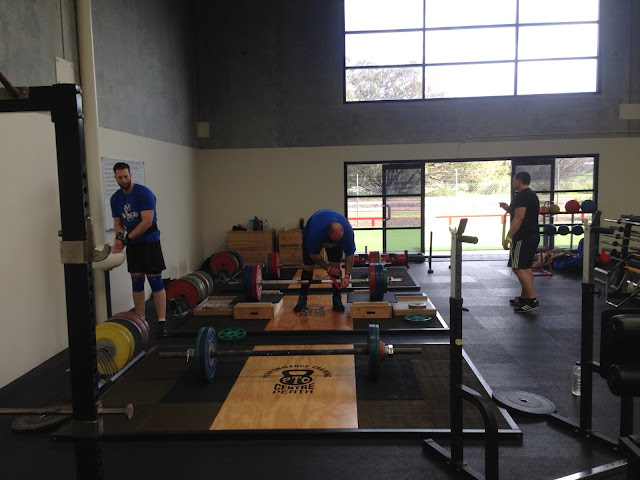 Carl  joined us for farmers walk to round out the session, and showed the crew how it's done with a brisk 122 kilo per hand 20 meter run, his first in a little while I think. His best is a staggering 160 a hand for 15, which happened a couple years back at the Pit. I wasn't there but I believe him. The guy was showing me and a bunch of other people what being strong meant five years ago. Respect where it's due.

Carl wants a bigger deadlift. He's been hungering for it and training like a madman to get it. Hitting quads every second day all this week had an obvious impact on his efforts today, only managing a single of 300 where he'd intended reps, but the stiff-legged deficits I saw him doing the previous week had already convinced me he was going to pull 310 or more at Perth Cup. And he politely asked me to stay out of the under 125s so he could get that heavy new dead on the PTC record board.

I told him I 'd do my best. I'd rather be as strong as possible with another 10 kilos of room in the division than risk losing strength with a cut. Carl's work is going to pay off. I know this, and I've already made peace with it. I mean come on; I have the best dead on the board in three weight classes, and when the day is done I'll still have the best in two. I have sworn this much to myself.
at 7:05:00 AM