THE DAY started early, to make the hour journey to Port Kennedy. Again, Crossfit Armed played host to a great day's competition, and thanks to owner Joel McLeod being 100% invested in the sport of Strongman, Dan and his team of helpers didn't have to transport much equipment. Joel's gym has two awesome yokes built by Les Milhinich (who represented SMWA at last year's Australia's Strongest Man), along with an excellent heavy log which some of the newer competitors found easier to handle than Fatboy. And of course plenty of weight, in funny coloured bumper-plate form... which the loaders found difficult to follow at times. I know I did.

I can't say I wasn't rested enough for the comp. I trained yoke only previous saturday and a light squat session on Monday night (so didn't record), and that was it all week. I tried to get as much warmup prep in before the events themselves, but my attention was sometimes divided between fielding questions from some of the new competitors and also wanting to make sure everybody smaller than me got their work in first. And with Dan out of the comp due to a muscle tear (nothing serious), I was literally the largest competitor there next to the behemoth, Joel McLeod.

I got what I thought was a muscle cramp in my left lower lat during my yoke warmup. I later felt something in the bottom right of my ribcage pop while warming up for the deadlift. At some stage the muscle cramp was replaced by a lumbar strain in much the same spot. I'm not really sure when this happened... the new yoke and deadlift PRs might have had something to do with it, though. And the pop in my ribcage didn't hurt at all at first, but later while attempting farmers walk I had to cinch my hard belt a little tighter to keep it from complaining. I don't think either injury is serious, but they really did hamstring my efforts. Again. 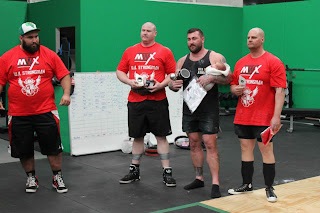 Of course, the log was a total waste of time, to keep from messing with my right shoulder any further, and I was literally too broken for my (perhaps over-confidant) Farmers walk; I just crumpled after picking it up the second time.

My yoke was good, and there's a video of it floating around... good, not great. I dropped it a few times. But I completed the full distance with a weight that I've barely been able to move more than a meter before, so definitely good progress there. And, of course, there was the deadlift; I pretty much stiff-legged it. More evidence I need to get stronger legs and work on my technique. Like that ever really stops.

I took 2nd place heavyweight... out of a field of 3 heavyweights. I'm now properly broken, and will be taking at least a week off training.
at 3:15:00 AM