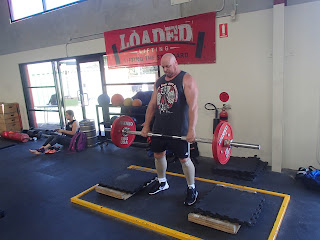 THE BIG NEWS, of course, is Jeremy Hogg. I gotta talk about him first. The first time I met Jeremy was at the Pit in mid-2013, I think. He was wearing a deadlift suit and pulling 300 for some slow and lazy reps. He's in his mid-40s now and hasn't been training strongman for quite a while. He spent some time in Tasmania for work, where he reinvigorated a passion for swimming and went on to win races against people half his body weight.

The Thursday just gone - his first strongman session in I don't know how long - he walked a 370 kilo yoke and pressed a 135 kilo log. So that's what internationally ranked strongmen do
on their first day 'just getting back into it.'

The man has competed against the likes of Brian Shaw, Mark Felix, Terry Hollands, and many other big names, some (like Shaw) when they were just starting out in the sport. During the clinic he regaled the crew with stories from the road to WSM, and training took a back seat to banter early on in the session.

Later came the coaching; Jeremy has an excellent eye when it comes to spotting weaknesses and advising on technique. He actively assisted Alex to complete movements he thought he couldn't do today. During the day, Alex, Steve and Ryan all appeared a little fatigued, and I was glad that I anticipated this well enough to have programmed today as their last events session - and the last heavy session in general - before April 9th's comp.

Speaking of - if Jeremy decides to compete it will be an awesome demonstration for the rest of the field. Also speaking of, there's a bunch of stuff we need to get sorted before comp day. Namely the equipment shed and the Power stairs.

Yes, that's right. We have Power stairs.
Les, owner/manager of Awesome As, dropped them off a couple of weeks back. In addition to their comp prep, the team have also committed to assembling the stairs on the last weekend before the comp. PTC Strongman is incredibly thankful to Les for providing an array of great equipment for us to use; all our stuff is made by Awesome As and/or provided by Les himself, from the yoke and farmers picks to our new stones and stairs.

The shed is also scheduled to be finished same day... it would have been sorted a while back, but we are still waiting (still) for Bunnings to ship us the parts that didn't come in the kit when PTC bought it, over two months ago. 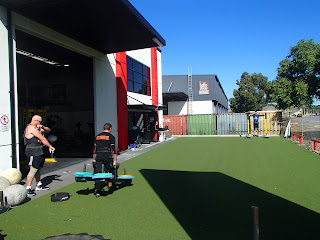 Kong has his last training session next weekend. Due to his FIFO work, we've had to alter his program a little bit. Any training he does on site this week is to be low impact only; no heavy sets of anything, conditioning and cardio only. He has the one opportunity to his it hard this coming Saturday before he joins the rest of the team in backing right off and just resting and eating over the week to come.

In other news, this week I graduated to 3 kilogram dumbbell curls (!!) and discovered I need a lot more dental work done than I had first thought. During my last checkup (and my first time seeing a dentist this decade), I was told I had a bunch of hairline cracks through my teeth from grinding. I'm gonna have three wisdom teeth removed and some gold caps put over the cracks. Pretty gangster, right? The wisdom teeth removal may also help reduce my sleep apnoea. On a related note, I'm looking at getting my uvula removed as it's actually choking me as I sleep sometimes. How messed up is that?!