The Stones, the Shed & the Strongman Comp!

THIS entry took several attempts over the last few weeks to complete. It started out being tough to write, literally; the tendon reattachment surgery happened on February first, and as I write these finishing touches now, I'm still not supposed to use my left arm for basic stuff (like driving) for another three weeks. But for each week that has gone by, something new and exciting has occurred, making the entry longer and longer. 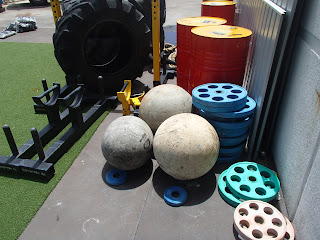 The surgery itself went according to plan (though the rigamarole leading up to it was disappointing), meanwhile at PTC Perth, the strongman equipment shed was arriving the same day! I came out of a fentanyl coma with no feeling below my left shoulder (which made checking my updates a cool, fun challenge) and was ecstatic to see the pics Paul sent me.

That weekend was a hot one. Alex, Steve and Ryan were out in it, assembling the shed while I did what little I could with one arm in a sling. That day made me thankful that I have such a dedicated team of people behind me and what the Rucci brothers want to build at PTC. The shed was sourced, purchased, and almost entirely assembled by people other than me. It would be finished by now, too, if it hadn't been missing several parts. As of yesterday, Bunnings is still waiting for them to arrive. 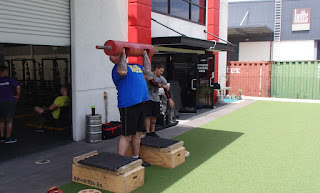 Next week's session and the one after were a further exercise in humility for me, as I watched this same crew operate like an oiled machine. But before I can even get to that I have another bomb to drop; the ASA sanctioned Strongman competition! This event has been planned since last year, and is again being hosted at PTC Perth's epic venue. I'm incredibly excited to have this confirmed on the calendar Sunday April 9th. 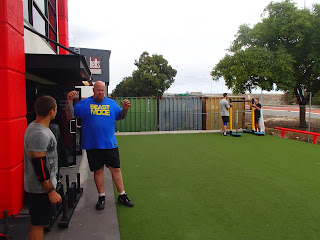 Now everyone has their objective. Every one of my crew who can be there is keen to compete at their chosen level (with novice categories that new and intermediate trainees can opt for in each event) and, after discussing the details with WA Strongman's owner/manager, Daniel Macri, podium finishers in each division will be invited to compete at this year's WASM state championships.

Back to training, and would you believe PTC has Atlas stones now?! Veteran strongman and owner of the IPL accredited 'Awesome As' range of powerlifting equipment, Les dropped them off a week back. I called him up to say thank you, and he offered me a set of power stairs!! Now there's a slim, outside chance that the stairs are ever going to happen, but the stones already have. Our collection of apparatus for loading and pick-and-carry medleys is looking really good now...

Of course, with my arm in a sling I can't play with these new acquisitions myself, much less show other people how to. But that's not really an issue right now as stones don't feature in the upcoming competition. So, each week, I stand around and watch the guys lift, doing what is commonly referred to as 'coaching'. And when people follow what I tell them, they get stronger. But this happens because they show up each week and move the weight, and don't quit when it gets hard, and I tell them things I've learned along the way while they do this. It's honestly as simple as that. 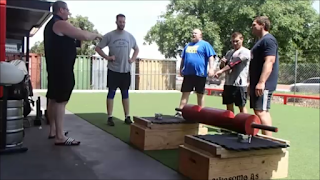 Case in point: last weekend the working weight for log press was 82.5 kgs. Kong jumped in before much of anything had been discussed and did a triple. Then, after a rest, clean-pressed it 8 more times. I estimated he had at least 9 or 10 good reps in him if he'd done the one max effort set. So this weekend I asked him to spend less energy on his warmup sets and hit 85 kilograms for as many reps as possible without failure. He managed 8, and afterwards a very comfortable single of 100.

The same thing happened with axle deadlifts; last weekend I asked Kong to pull 180 for 3 sets of 5, but due to the volume in his warmups he was fatigued when it came to his money sets, managing only 5, 4, and 3. This week we kept the working weight the same, trimmed his warmup sets and reps down, and he hit 180 for 4 sets of 4.
Meanwhile Ryan took his log work back to formula and hit a max effort set of 18 reps at 60 kilos, and Alex pushed through for 12 reps of 85, which is a three rep improvement since he pressed that weight late last year.

Each week I take footage of as much stuff as I can and am currently in the middle of compiling a home video of PTC Perth Strongman's training clinics. I might make it fancy, with a soundtrack and star-wipes and stuff. All depends how much footage I have that doesn't include me blocking half the frame.
at 2:42:00 AM