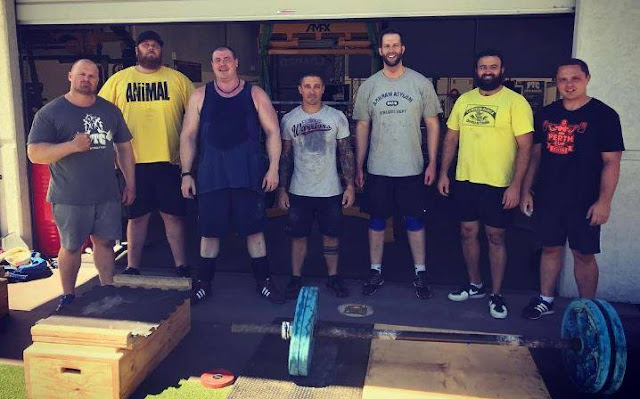 WHEN it ruptured, I felt the tendon 'twang' against the side of the drum I was clutching as it rolled down my arm.

This morning I'd brought everything forward an hour or more. I woke early, took my thirty-or-so assorted pills (including 20 grams of fish oil and an extra-strength women's multi-vitamin... not sure why that's pertinent here) washed down with a protein shake, strong coffee, a litre of milk on top, couple of nut bars and, once I'd arrived at the gym, a Hungry Jacks Angus meal.

It was over an hour before the clinic was due to start, so I set to work filling the second of our four new drums. While the first one we made 70 kilograms, this one would be 90.  The last two, eventually (meaning, when we're strong enough to move them), will be loaded to 110 and 130. That remains the plan still.

While I was to learn another hard lesson of my own to round out the session, it was otherwise a fantastic day! The whole team showed up, including Carl (well, for the group picture at least) and Kong, who we've not seen since last year.

I again set up the camera to record the whole 2+ hours of it, only to discover that the power outlets I've been using aren't working... which explains why there's only as much footage as the camera has battery power for and the scales didn't work when I came to use them. Dale offered some assistance, and together we guesstimated the fill to 90. By then the crew had begun arriving.

Every session begins with high volume, maximum effort log clean-press. This week it was 77.5 kgs. I set the pace with 16 reps, Alex made 17, and Steve lifted his leg and pissed on us both a little with a finessed 20. Then on to axle power-cleans, where it was settled that the 80-90 kilo mark was a good working weight for the three of us. Ryan performed some deadlifts while Kong worked up to equal his best 1RM log press of 105, and Mat also got involved with the cleaning, showing greatly improved mobility and form... but stopping short of breaking a sweat.

I put together a carry medley for the next event. Four implements: a 65 kilo dead ball, a 70 kilo drum, an 80 kilo sack, and the 90 kilo drum to finish. I didn't even get to have a proper run as, while attempting to show Kong and Ryan a different method for picking the drum (a method we now know is to be avoided), I obviously strained an already fatigued left bicep tendon and it broke. Again, a little disappointed we had no footage of the rest of the day, or this mishap.

As I write this I'm dosed up with naproxen and tramadol, my arm in a sling and my keyboard under-utilised. There was no ultrasound available at the ER, nor was there a doctor to give me a prognosis. A physiotherapist assessed me, slung my arm and procured my scripts, and said I should see my GP on Monday for an actual diagnosis. Here's hoping this one doesn't take too long to bounce back from. The year's only just started, and there's still plenty of stuff I can do to train around the issue (I will have had my arm in a sling while training three times now), the biggest hurdle I can see right now is the drive there.

Just seeing as this happens often enough, maybe my next car should be an automatic.
at 5:09:00 PM