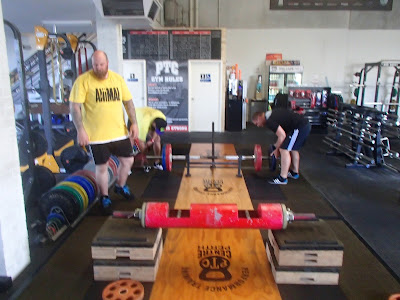 JUST TWO weeks from the WA Strongman qualifiers. This doesn't pose a problem for me as I'm not strong or uninjured enough to consider entering. My guys, however, have been getting stronger and more confident in their abilities as game day draws closer. For Alex it's still a hard sell, but at least he's assured me he'll be at the event on the day, so he can see just what his competition in the under 105s can do.

Today it was Alex, Kong and the aloof Mathew also graced us with his presence, which is currently in high demand. As a new father he's needed almost constantly for feeding, being screamed at, throwing up and pooping on. Despite his absenteeism today he pulled his previous 1RM (barbell) deadlift for a triple, with the axle. And I make my trainees axle deadlift from the same height as a standard bar, so this was a significant strength increase for Mat. And this was after he'd fairly impressed under the yoke and almost, I think, hit a new personal record with the log. It's been a while so I'm not sure anymore what his previous best was.

Kong had an issue early in the day. A complete newbie to the sport, it was his first time under the yoke. Fortunately, PTCs yoke is made by Awesome As, so it's studier than most and designed to comfortably fit oversized humans like him. I had him work up from just the yoke (130 kgs unladen), to 170 kgs and then 210 kgs. Kong lumbered along under these loadings, quickly learning how the yoke encourages the spine to move in new and interesting ways. Then, while walking a 250, he got just a couple of meters before putting it down. He complained of hearing/feeling a crunch or pop, like knuckles cracking, in his lower thoracic area. I'm not a doctor but for me that spells no more training for Kong till he sees someone who is.

He was advised to sit out the rest of the session and was smart enough to listen. It's a real bummer as he's FIFO and is flying out before the WASM qualifiers. But now he's got to spend his last week and a bit here getting treated instead of getting stronger. I had hoped to see him log press something ridiculous for a person on their second strongman training session ever. But all in good time. For now I just hope he's not done something serious to his back.

Alex asked me what he should be doing on yoke, given that this was our first session with it in some time and his previous best was 310 kilograms for 15 meters. Well, I said, the loading for your division on May 7th is 325 for 15 meters... so let's round up to 330 and walk it for 20. So we did, and he did. I was most impressed. And this guy says he doesn't want to compete in a fortnight.

On to axle deadlifts. With Kong assisting loading, the unbroken two followed their respective routines. I've mentioned Mat's unexpected new triple of 140, but after him Alex worked up to a max effort set of 190 kgs for 11 reps. Later he told me he's been doing the same max effort programming, and pretty much exactly the same loading, each Thursday for the last six to eight weeks. I think I must have done a double-take. He followed this by mentioning that he was beginning to feel burned out, to which I replied 'No shit!'.

We stopped what we were doing and I had a brief huddle with the three of them at this point. I used the occasion to discuss with them what (in my experience) constitutes an unreasonable program for an un-enhanced lifter. Take-home points were:
* Max effort programming of compound lifts more than once a week is either unnecessary, injurious, or both - especially the deadlift.
* The exception that kinda proves the rule would be the press. This is because there are plenty of variations of press which require different aptitudes and will hit a broader range of muscles to varying degrees, so an intermediate lifter can train maximal loadings of different press variations in the one week with low risk of overtraining.


For argument's sake let's change focus to Powerlifting and the bench press. For an intermediate, un-enhanced lifter, maximal effort, flat, barbell bench press twice a week is going to increase the likelihood of overtraining the movement. But if so desired, a split with a second press day involving heavy incline bench, overhead press, shoulder press or even cable flys will further work stabilisers and other muscles which indirectly assist your bench while causing less overall stress on the muscles you utilise most for conventional bench press. Think 'tri-dominant' / 'pec-dominant' / 'delt-dominant' pressers. Once fatigued a lifter should look at another press variation that relies on the favoured muscle group as little as possible if they intend on doing maximal effort both sessions.

I'm not suggesting that this is a great way of programming the press - for a Powerlifter it really isn't. For someone attempting to train for both PL and SM, however, different templates for bench press and overhead press is a very good idea. Ultimately the PLer is far better off devoting one weekly session to the press and hitting the competition lift first and thoroughly, followed by as many complimentary accessories as you have the capacity for. If you have to, intuitively alter your loadings depending on how hard you've been hitting each lift and what your current goals are.  No, I didn't say change it up every week on a whim so there's no possible way to gauge progress. Jesus.

I also didn't say nobody should ever squat or deadlift at maximal loadings more than once a week. Don't be stupid. What I am saying is that, with a basic template of Squats on Monday, Press Wednesday, Pull Thursday, and a couple hours of Strongman events on Saturday, my trainees will quickly find themselves bombing out if they expect to hit new numbers every session of every week.

But anyway, back to my point. In six weeks Alex is scheduled to pull 250 at least once. My money is on him repping it, but even if it's just the single that's still a 40 kilo increase in the time I've been training him... about 6 months I believe. He's only on track to do this IF he drops max-effort, mid-week deadlifts immediately. If we hadn't had this chat, Alex would have gone on to pull a 197.5 kilogram barbell for as many reps as possible next Thursday, and then tried to do the same thing with a 200 kilo axle at my clinic, two frigging days later! I bemusedly had to tell him that he was liable to ruin himself before the next six weeks are through. So I guess, to use broad strokes, the moral of the story is: talk to your coach more. Alex.

Finally, above you will see Kong's 105 kilo log clean press from last week. His first ever lesson. It's really quite exciting to contemplate what he'll be able to do in just 6-12 months from now...