My Girlie Shoulders: A Proper Update

So in case anybody doesn’t know this already (if not actually bored shitless of the whole subject by now), eight weeks ago I had my shoulder surgery, and ten days after that I was back at the Pit doing stupid shit I probably shouldn't have done. 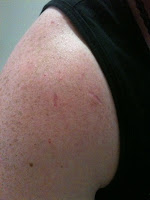 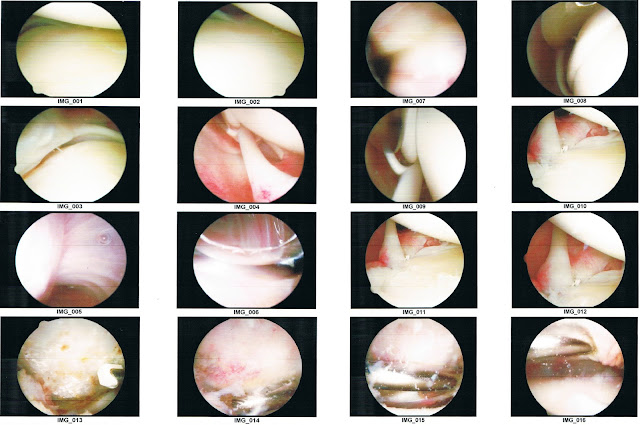 I haven’t properly addressed that whole thing,and it’s about time I did. After all, I have pictures and crap. No real scars to speak of, but the pictures the surgeon took with his tiny little camera are kinda cool. The surgery was actually less complicated than the MRI suggested it would be (the biceps tendon healed up in the weeks I was nursing it), so it was a keyhole operation. Tiny, boring scars… it’s like I didn’t even have surgery.

The surgeon repaired the cartilage and sank some kevlar screws into the humeral ball. The bones themselves were, according to him, perfect so, again, good news.

Anyway, after I backed off the weight it soon began to feel like I was achieving exactly zero each training day… not a lot to talk about, so not a lot to share on here. And for the next several weeks, if not months, that reality isn't really going to change. The little numbers I put up and the still very limited selection of exercises I have to stick with will not exactly be exciting.


Because of this, when I'm not logging my hum-drum workouts I intend to use the space to bring more exposure to Strongman and Powerlifting events in the state. I won’t be relying on my own photography prowess for these articles (I’ll be purloining the best pics from Gabor’s Facebook profile, for the most part) but I write my own shit at least.

I was actually intending to take a left/right comparison pic, to show the extent to which my right side has atrophied, but my crappy iPhone and my general inexperience with topless selfies meant the pictures don't really show much of a difference at all... but this one (left, tits out) at least can be used for an update on my body recomp project.

I'm currently still sitting on 125 kilograms / 275.5 lbs, and I've been here for the last several months, give or take a kilo. I've had some obvious setbacks which haven't prevented me from working slowly but surely on changing my body composition.


The other picture of me (also of my left side) was taken one year ago this month, when I was weighing in at 129 kilos. And the third picture (bottom right) was taken around xmas of 2010. I'd been training for about eight months at this point, I hadn't yet met Dan and the rest of SMWA so my training was pretty half-assed. I was 148 kilos... still mostly fat. 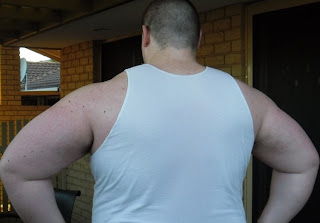 I don't have any good comparison pictures of myself from back then, as I was embarrassed to look at my own figure in profile.


The most dramatic changes took place over 2012, but now that I'm healing up and back in the gym regularly again, there will be more dramatic changes to come. As I've said before - to myself way more than anyone else - this isn't a fad, it isn't a phase, it's my future.
at 7:10:00 AM